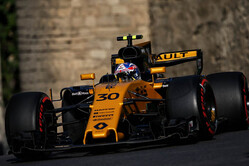 Renault Sport Formula One Team endured a tough qualifying for the Azerbaijan Grand Prix at the Baku City Circuit. Nico Hülkenberg set the fourteenth fastest time, however an electrical issue precluded him from completing the Q2 session. Nico had earlier set the eleventh fastest time in FP3. Jolyon Palmer had to sit out qualifying after his car suffered from fire damage in FP3. The fire was extinguished, however the damage caused required an engine change which could not be completed in time for the session.

Nico Hulkenberg: “There was an electrical problem meaning we lost power and then the car couldn't run at the end of Q2. It's a super challenging and tricky track here and we've seen a lot of issues up and down the pit lane. Tomorrow we'll push and fight for points; it's not going to be easy this weekend, but it's a long race so you just have to stay on the ball and seize every opportunity.”

Jolyon Palmer: “It's obviously not ideal to miss qualifying, but we had what looks like a fuel leak which ignited, and obviously did too much damage to the car for us to be able to make qualifying. Tomorrow I'll start from near the back of the grid, or the pit lane, so I should be in a strong position to capitalise if there's any issue up the front of the field. Hopefully we make a few positions on the first lap, then anything can happen.”

How was qualifying for the team?
Alan Permane, Sporting Director: It was a tough day at the office for us. Jolyon was unable to participate in qualifying due to fire damage to his car caused by a high-pressure fuel leak in FP3. Nico proceeded to Q2 however his car suffered from an electrical issue. It was a far from ideal day on both sides of the garage.

What are the considerations for tomorrow's race?
AP: We don't expect much tyre degradation here so we don't expect to see numerous pit stops. Both cars start further back on the grid than expected so there's everything to do. We can afford to be adventurous with strategy for Jolyon whereas Nico is still in a decent place to go for points from his starting position.