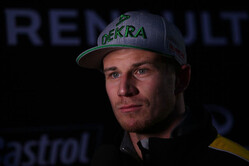 Renault Sport Formula One Team experienced a difficult Azerbaijan Grand Prix with retirements for both Jolyon Palmer and Nico Hulkenberg at the Baku City Circuit. Jolyon suffered from a misfire on the way to the grid and this issue worsened until his retirement at the end of lap seven. Nico was running as high as fifth in what was a highly eventful race, however he clipped the wall and broke his front right suspension on lap 25.

Nico started the race from P13 on new Supersoft Pirelli tyres, changing to a new set of Soft tyres on lap 13 under the Safety Car, then new Supersoft tyres when the race was red flagged on lap 22. Following the restart, he retired from fifth position on lap 25 after clipping the inside of turn seven and damaging the front right suspension.

Jolyon started the race from P20 on a new set of Supersoft tyres. He retired at the end of lap seven with a technical issue.

Nico Hulkenberg: "It's always a balance on a street course of getting as close as possible to the barriers but not too close. Unfortunately, I just clipped my front right and that was it for the suspension. It's frustrating for me and all the team. Until then the race had been pretty engaging and it looked like we were in a position to continue our series of points scoring races. It was pretty tough on the restarts with the tyre temperature and I think everyone at home saw an eventful race. Next up Austria; let's hope for better things there."

Jolyon Palmer: "I experienced a misfire on the way to the grid; it got worse and ultimately the drivability was so poor that we had no choice but to retire the car. I made a decent start and then some overtakes into P15 so the start of my race was okay. It's just been one of those weekends; I can't remember ever having so few laps over a race weekend. My hope is to head to Austria with a reliable car so I can have a clean Grand Prix to show what I can do."

Cyril Abiteboul, Managing Director: "On a day like today, a double DNF is the worst that can happen to the team both in terms of race results and in terms of championship position. We need to understand and immediately address the technical issues that prevented Jolyon to even participate, and Nico to start higher in the grid this weekend. We saw a highly unusual and eventful Grand Prix today and we will do all we can to make sure that this will be our only double DNF of the season. The only positive note is that a Red Bull Racing car finished on the highest step of the podium, which, on a track like Baku, is a great reward to the efforts made in bringing extra power to our customers."