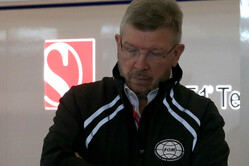 Charged with putting together the first of the sport's 'five year plans' under its new ownership, Ross Brawn has admitted that before addressing the somewhat thorny issue of how to level the playing field in terms of income, he first has to deliver a new formula for the sport, one which will reduce costs, increase the competition and build the foundation for the sport as it moves forward.

While the current commercial contract with the teams runs out in 2020 so too does the current engine formula, and Brawn concedes that before he can go to the bigger teams and call on them to accept a smaller slice of the 'F1 cake' he has to be able to present them with a vision for the future of the sport that will ensure they remain on board and encourage them to play their part in its future.

"To have a discussion about remuneration with the teams is difficult if you don't present both sides," said Brawn, according to Motorsport.com. "We've got to present how we see the sport going forward in terms of the investment that the teams make, because it's substantial.

"I think it's fair to say that there's not a team in F1 that wouldn't welcome a reduction in costs," he continued. "We're preparing our case and our proposals with the FIA to achieve that.

"We're building a team at the moment, and you'll see from the announcements we've made that the team is multi-faceted, and it's both technical people and commercial people."

Indeed, the team Brawn is assembling consists of several people he worked with at Honda, Brawn and Mercedes, including Nigel Kerr who is charged with how a new rules package could help reduce spending.

"Nigel's task will be to help build the financial models that can demonstrate hopefully the way forward for the teams in F1, said Brawn. "Clearly it's got to be in co-operation with the FIA. The FIA are the regulators of our sport, and they are the final arbiter of what goes on.

"We want to supplement and support those activities," he insists, "and make proposals that we think are good for the sport. But the remuneration debate has to go hand-in-hand with how we control the costs, or the investments needed in F1."

Already facing the prospect of having their income slashed, Brawn insists that the additional bid to level the playing field on track is not intended to fully compromise the big guns.

"But we don't want domination. We need an environment where a team that does a really good job can do well. But we don't want a situation where financial power enables a team to get a dominant position, as has happened in the last few years."

Ironically, the self-same situation that allowed the poacher turned gamekeeper to build his reputation.