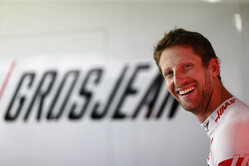 Haas F1 Team drivers Romain Grosjean and Kevin Magnusson qualified eighth and 13th, respectively, for the Monaco Grand Prix Sunday at Circuit de Monaco. Magnussen, however, will start 11th due to grid penalties incurred by the McLaren duo of Jenson Button and Stoffel Vandoorne. Button qualified ninth but will serve a 15-place grid penalty while Vandoorne qualified 10th but has a three-place grid penalty.

Magnussen set the ninth-fastest time in Q1 with a lap of 1:13.531 around the 3.337-kilometer (2.074-mile), 19-turn track. Grosjean overcame an early spin at Mirabeau (turn five) where he kept his Haas VF-17 off the wall and out of the way of oncoming traffic. He went on to nab the 12th quickest time with a lap of 1:13.786. Both drivers advanced to Q2 as only the top-15 drivers move on to the second round of qualifying.

In Q2, Grosjean earned the sixth fastest time with a lap of 1:13.203. Magnussen appeared poised to join his teammate in Q3 until two factors conspired to leave him only 13th fastest with a best time of 1:13.959. On his last run toward the end of Q2, Magnussen was held up by the Mercedes of Lewis Hamilton. It all proved moot, however, when the double yellow flags were displayed with 12 seconds remaining in the session after Vandoorne clipped the turn 15 wall as he navigated the apex of the swimming pool section. Only the top-10 drivers from Q2 move on to Q3.

Locking out the front row of the Monaco Grand Prix was Scuderia Ferrari. Kimi Raikkonen set the all-time fastest lap at Monaco with a pole-winning time of 1:12.178 that was .043 of a second better than his teammate, Sebastian Vettel. It is Raikkonen's 17th career Formula One pole but his first since the 2008 French Grand Prix at Magny-Cours, a span of 128 races. It is Ferrari's first front-row lockout at Monaco since 2008 when Felipe Massa earned the pole with Raikkonen in second.

Before Grosjean, Magnussen and the rest of their Formula One counterparts participated in knockout qualifying, they had one final practice (FP3) to dial in their racecars for a quick lap around the track. Both drivers were on the same program during the 60-minute session, with one installation lap on Yellow soft tires before switching over to new sets of Purple ultrasofts to emulate qualifying.

Romain Grosjean: "It was a pretty good qualifying session. The car was quite unpredictable, but that was the tires. They went from working to not working, front and rear. The car was changing every lap. I was struggling with that as I like to have a car balance I understand, but eventually in Q1 I managed to get a decent enough lap in and pulled through. In Q2, I had a really good lap, the tires worked, then in Q3 not quite so good with the rear tires. Anyway, we're here in the top-10 and that's what we wanted. It's a great place to start the race."

Kevin Magnussen: "I just didn't get a free lap there in Q2. I had traffic on my out lap, first lap, second lap then my fourth lap. So I didn't really get any laps, and that's not the way to move forward, but traffic's the thing around here - very typical Monaco. To have just one lap in Q1 and Q2 free from traffic is very unlucky. It's annoying and frustrating as I was very happy with the car. We had the pace to do well. We could've been in Q3. Again, looking at other people who had misfortune as well, it could've been a good result, but that's how it is. Hopefully, we can make it up in the race."

Guenther Steiner: "A good day today. Starting Monte Carlo in eighth and 11th, everything is possible. The whole weekend for us coming up into qualifying was good. Everybody's done a fantastic job, not only the drivers but also the mechanics and engineers. We were well prepared for qualifying. The only unfortunate thing was Kevin found a lot of traffic out there. He could never do his best, which would've been Q3 for him as well. Hey, that's Monaco. We know it's difficult, so some you win and some you lose. Tomorrow we're out there trying to get them both in the top-10."