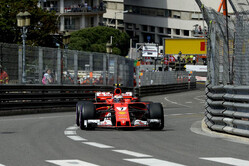 For a sport often given over to hyperbole, for once the terms "all important" is warranted, for in the narrow confines of the Principality starting at the very front - or even the very back - is vital, for that is the best way of avoiding the incidents that are part and parcel of the event.

Indeed, look no further than this morning's practice session, when an error of judgement probably no more than a couple of centimetres meant that Ocon clouted the barriers and broke his steering arm as opposed to getting through cleanly and improving his time.

Following Thursday's "wrong direction", Mercedes appeared to be back on track this morning, but were no match for the Ferrari pair.

Like many, the Mercedes is having issues generating heat into its tyres and as a result while Bottas was a convincing third, teammate Hamilton was fifth.

The Red Bulls were fourth and sixth, Verstappen the quicker of the pair, but a late brake-by-wire issue for Ricciardo will have given the team cause for concern.

Once again the Toro Rosso duo were mighty, Sainz and Kvyat finishing seventh and eighth, suggesting that a decent points haul could be on offer.

Magnussen did well to take ninth in the Haas while Vandoorne and Button sandwiched eleventh placed Perez. Sadly however, while the Belgian has a 3-place grid penalty following his Barcelona clash with Massa, Button has a 15-place penalty after Honda opted to change his Turbocharger and MGU-H following Thursday's session.

Behind these, Williams, Renault and Sauber all struggled.

With Pirelli confident the ultrasofts can last the whole race distance, tyre strategy will be a factor not only tomorrow but this afternoon, though it is doubtful anyone will want to qualify on the supersofts as they might elsewhere.

Another area where the tyres could make a difference is Q1, when, as drivers seek to get heat into their tyres, there are sure to be traffic issues. Added to this is the fact that some teams, think Mercedes, need two laps in which to warm up sufficiently.

As one would expect long before the lights turn green there is a queue at the end of the pitlane, Vettel among the early birds, indeed at the very front.

In no time at all there are 15 drivers on track.

As work continues on Ocon's car, Verstappen goes quickest with a 13.278, the Red Bull driver quickest in the final two sectors.

As Ricciardo begins his first flying lap, Hamilton becomes the latest to miss the apex at the Nouveau Chicane.

Elsewhere, Ocon has left the Force India garage. On his first lap the Frenchman posts a conservative 20.928.

As Magnussen improves to seventh (13.531), Verstappen goes quickest in S1 however, the Dutchman fails to improve following two poor sectors.

Grosjean spins as he exits Mirabeau and is very lucky not to collect a Toro Rosso (Sainz) - and one or two others - as he attempts to get his car pointing in the right direction.

Ocon improves to 14th with a 14.237 as he leaves Grosjean, Stroll, Palmer and the Saubers in the drop zone.

With just over a minute remaining, Hamilton is in the pits and in tenth position. But as Larry Olivier said in Marathon Man, "is it safe".

"The car is broken," says Ericsson as he stops at T10. Replay shows that in fact his left-rear tyre departed from its rim.

Despite PBs in all three sectors, Palmer fails to improve and misses the cut.