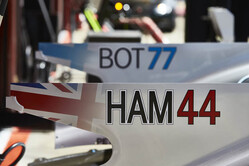 Be afraid, be very afraid... Mercedes gets serious with dramatic upgrade package

It isn't only the driver identity on the dorsal fin, complete with national flags, that will make the Mercedes look different this weekend... the German team has brought a massive raft of updates to Barcelona as the battle with Ferrari resumes.

Though it was Red Bull that was due to raise the bar with its upgrade package, the Austrian outfit seeking to join the Mercedes/Ferrari battle, it looks as though it is the world champions who have dug deepest and brought the biggest and most dramatic series of upgrades.

In addition to a new floor, barge boards, two-tier monkey seat and rear wing, the German team has also brought a radical new nose, first sightings of which have stunned many in the Barcelona paddock.

And as if that isn't enough, the German team has also brought forwards its engine update, meaning that Lewis Hamilton and Valtteri Bottas will have access to a new, more powerful power unit which comprises a new ICE, Turbocharger, MGU-K and MGU-H.

In addition, with a nod to its continuing tyre issues, the car is now lighter, just above the 728 kilogram limit, whereas before it was 6 kilos over the limit.

While customer teams will have to wait until Monaco for the new engines, Hamilton and Bottas will have the new units, which offer more power over a longer period, from FP1 tomorrow.

"It's a tight battle with Ferrari, it's all about the details," admitted Bottas. "Every single bit counts, and definitely we are trying to develop the car as quickly as we can, with all the new bits."