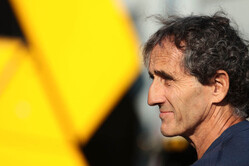 Pirelli has ruled out the suggestion from Alain Prost that teams be allowed to 'pick 'n' mix' their tyres.

The legendary four-time world champion, nicknamed The Professor due to his cool analytical approach which included uncanny mastery in managing such aspects of his car as tyres, had suggested that in a bid to increase the involvement of the driver and at the same time create more uncertainty, more freedom should be given in terms of tyre choice including mixing different compounds on the car at the same time.

"Let drivers put together thirteen sets of their choice from the five tyre types," he told Auto Motor und Sport. "I'd even allow a mix of tyre types in a set. A soft left and on the right a hard, or the other way around.

"I'd also abolish the rule that drivers must race with two different types of tyre," added the Frenchman who won his titles with McLaren and Williams. "When someone with hard tyres wants to drive through without making a pit stop, why not? Perhaps another is quicker with two stops and the consistently softest compound."

However, for the most part Prost's suggestions have been dismissed by Pirelli.

"Compulsory (tyre) changes are central to the show." Mario Isola told Auto Motor und Sport. "The teams' individual stints are differentiated in this way. You can stay out there on a set of tyres for a longer or shorter time. If you give the teams the chance to contest the race without stopping, most would work in this direction."

As for mixing the compounds, he said: "That would perhaps function with a GT car if you select a harder compound for the more heavily burdened front wheels. But Formula 1 cars are too sensitive for this."

On the other hand...

"What we could do is produce differing compounds for the front and rear from the same tyre type," he admitted. "The regulations actually permit us to do that."