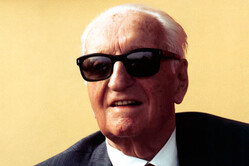 Italian police have revealed how they foiled a bid to steal the body of Enzo Ferrari and hold it for ransom.

According to investigators a gang in Sardinia had planned to steal the body from its tomb in the San Cataldo cemetery in Modena, just a few miles from Maranello and intended demanding a ransom from his family.

It is understood the proposed crime came to light during an investigation into arms and drug trafficking in Sardinia.

In 1978, months after his death, the body of legendary comedian Charlie Chaplin was stolen from its grave in Corsier, Switzerland. A ransom of £400,000 was demanded of his widow Lady Oona Chaplin who refused to pay, claiming that "Charlie would have thought it rather ridiculous".

A year earlier, police were forewarned of a plot to steal the body of Elvis Presley, an informant having infiltrated the gang that intended to demand $10m.

Enzo Ferrari, the founder of the legendary car manufacturer and racing team that bears his name, passed away in August 1988. This year marks the 70th anniversary of the founding of the Ferrari company.