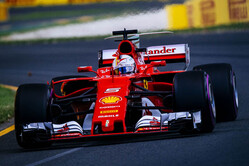 There are no points given out after qualifying and the 2017 championship has only just begun, but having Seb Vettel on the front row in the SF70H, with a gap to pole down by half a second, does nevertheless mean something. And with Kimi Raikkonen right behind in fourth place, it shows that the overall picture is encouraging.

"Good recovery" said Seb over the radio, immediately after posting a time of 1:22.456, which secured him second place on the grid. He was referring to the work of the team that had managed to fix what needed to be fixed in terms of set-up, after Friday's free practice.

As for Kimi, whose best lap was a 1:23.033, his usual honesty meant he didn't disguise his slight disappointment at being on the second row.

Sebastian Vettel: "If we look back twelve months, the progress we have made is clear to see. We are working well as a team, having had a great winter; a winter of changes, but all for the best."

Kimi Raikkonen: "I made life complicated for myself right from the first session: I never managed to put all the sectors together and that cost me lap time. But the car feels strong and I just have to do better."