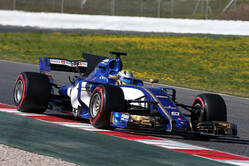 "25 years in Formula One" - the Sauber F1 Team is ready to start into the first race weekend of it's remarkable and historic anniversary year. This 2017 edition of the grand prix race in Melbourne on the circuit at Albert Park is not only the traditional season opener, it is also the first race for the new, faster and wider Formula One cars with the broader tyres. After intensive pre-season testing with the Sauber C36-Ferrari in Barcelona with more than 3600 kilometers completed, the Swiss team feels well-prepared for the race 'down under'.

Marcus Ericsson: "I like Melbourne a lot as it is a fantastic place. The fans and the atmosphere there are just great - I always enjoy being downtown in Melbourne and on the circuit at Albert Park. I can't wait to finally kick off the 2017 Formula One season in Australia. After challenging pre-season testing with a lot of data collection and preparation, I am going to Melbourne with a positive mindset. Now we have to see how things work out during the first race weekend with the new car. The Albert Park circuit is a bit tricky with a mix of permanent race track and a street circuit. In general I think it is going to be a challenge to find the right set-up, but I am confident we will get this done."

Pascal Wehrlein: "The Australian Grand Prix will be very special for me and also for the Sauber F1 Team. It is the beginning of my new role as a Formula One race driver in the Swiss team, and I am sure when those five lights go out it will be a unique moment on the race day. During the second week of pre-season testing I had productive days, where I was able to get quite familiar with the Sauber C36-Ferrari procedures. After intense physical preparations in the last few weeks I am excited about going to Melbourne, and I feel ready and well-prepared for the challenging season opener. It looks promising at the moment for me, but we never know until we get to Melbourne. I have full trust in our teamwork."

Albert Park is a rather special venue and not a permanent race track, thus the surface will be improving throughout the weekend, weather permitting. It's abrasiveness is usually expected as quite moderate so Pirelli has allocated the soft, supersoft and ultrasoft compounds for the race weekend.

When it comes to set-up for the new C36, braking stability and traction from low speed as well as sharp changes of direction will be important factors.