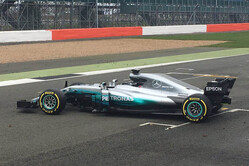 Toto Wolff has dismissed claims that the season opener could be marred by protests over his team's suspension system.

With the teams failing to agree to a solution to the ongoing row over the legality of the suspension systems being used by Mercedes and Red Bull, there are fears that the result of the Australian Grand Prix could be protested as it appears that it will be left up to the Melbourne stewards to rule on the matter.

Speaking on Wednesday at the launch of the Force India, Technical Director Andy Green admitted that he believed a protest was likely, though he insisted his team would play no part.

"I can definitely see it happening," he told reporters, "however, we will stand back and see how it develops and then react to it like we normally do.

"We have been testing various concepts for a while now," he admitted, "and each has got some merits. We really want to see how the tyres perform, what the balance is, and where the weakness of the tyres is so we can then attack that with a mechanical solution.

Green believes the FIA is responsible for the row, having failed to clarify the rules at the outset and banned the systems when they were first being considered.

"I would have liked some more clarity on the suspension side," he admitted. "That really muddied the waters and it is unnecessary. It is under the skin. I don't think it is great for the show. There are marginal gains for quite substantial expense.

"I would have liked to have seen all of that nipped in the bud a bit earlier, and not been allowed to develop to where it has got to now."

However, speaking at the launch of his car, Mercedes boss Toto Wolff played down fears of the season-opener being overshadowed.

"There have been discussions in the Technical Regulations Meeting around suspensions and legality," he said. "And as far as Mercedes is concerned, I am very confident and comfortable with the situation. We know what the rules say and what you are allowed and not allowed to do.

"I think it is the usual kicking at the beginning of the season," he admitted, "and it is not something that is worrying for us."