Mercedes may yet use fin 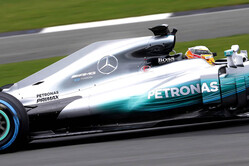 Never mind the fact that the cars we have seen thus far do not look particularly "aggressive" or "mean", one of the main talking points has been the horrendously large dorsal fin - or airbox sail as some are euphemistically calling them - that most of the teams have opted for... except Mercedes.

While Williams has sensibly covered theirs with Martini branding, and Renault has attempted to blend theirs in with the rest of the livery, the fins on the Force India (top) and Sauber are particularly big, bare and ugly.

While the W08 was sporting a tastefully small fin on track today, along with (what the team calls) a 'T-wing, the team's Engineering Director, Aldo Costa, went and spoiled it by admitting that the team will be using a larger 'sail' in Barcelona next week.

"We have seen many pictures of other cars, but from now until the first race we will have a continuous programme of evolution," he told reporters.

"As you see, the launch spec was without the little T-wing, and then we tested it, and we will carry on in Barcelona day by day testing different configurations. We will also have a longer tail configuration to be tested in combination with new rear wings for Melbourne."

"The car in essence from now until Melbourne will change all the aerodynamic surface," he added.