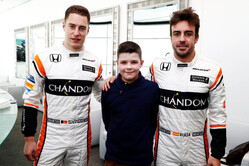 Two seriously ill F1 fans attended the launch of the McLaren MCL32 at Woking on Friday.

Sam Parris (top), twenty, from Bromley, Kent has Ewing's sarcoma, a rare form of bone cancer. He was initially diagnosed with Ewing's in 2010 and beat cancer twice. Sadly, Sam has relapsed and his prognosis is uncertain. Despite this, Sam is fighting all the way and is determined to beat cancer for the third time.

Oliver Osbond (right), eleven, from Coulsdon in Surrey was diagnosed with acute lymphoblastic leukaemia on Christmas Eve in 2012.

At the launch, Sam and Oliver were given a full tour of the McLaren Technology Centre and saw how the cars were made. Much to their delight, they also met McLaren's drivers, Fernando Alonso and Stoffel Vandoorne.

"The whole team is absolutely thrilled to have worked with Starlight to get such big McLaren fans in Oliver and Sam exclusive Golden Tickets to the launch of our new challenger," said Eric Boullier. "It makes today extra special for everyone at McLaren that they can both share our big moment with us."

"It was amazing to be at the launch of the new car," beamed Sam. I feel very privileged to be one of the first people to have seen the car, and I'm grateful to McLaren and Starlight to have been one of the lucky few invited to the launch. I'm quite excited to see the car in action when the season starts, and I'll be following the pre-season tests with anticipation!"

"It was amazing to be at the launch of the new McLaren-Honda," added Oliver. "I can't believe I'm one of the first people to have seen the car! I was so shocked when Eric turned up on my doorstep to tell me I'd been invited. I can't wait to see the car in action on my Starlight Wish at the Monaco Grand Prix!"