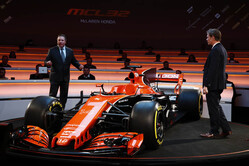 Insisting that the team is healthy financially, Zak Brown admits he needs to deliver a title sponsor for 2018

The sceptics among us will argue that McLaren's retro livery isn't so much about the team’s "glorious 50-plus-year history", but rather the fact that the Woking team is still without a title sponsor.

Be in no doubt folks, had the likes of Coca-Cola (unlikely after Flav's shenanigans), McDonalds, Pepsi or Apple offered the right kind of money the MCL32 livery would have been whatever they asked for... 50-plus year history be damned.

Nonetheless, as we accept the fact that the team's latest contender resembles a Liquorice Allsort more than the glorious Gulf Oil sponsored F1, Indy and Can-Am cars of the late 60s and early 70s, executive director Zak Brown insists the team is in good shape financially and is targeting a title sponsor for 2018.

"We have very wealthy owners who want to win," he told reporters, referring to Mansour Ojjeh and Bahrain's sovereign wealth fund Mumtalakat - not forgetting Ron Dennis who still own a 25% stake. "They are not going to let budget get in the way of us progressing up the field.

"The partners that we do have make healthy contributions," he added, "Honda's obviously a fantastic and big contributor to our racing team and we have lots of other revenue streams inside McLaren Technology Group. So, budget-wise we're healthy."

In terms of a title sponsor, Brown - a widely acknowledged marketing guru who turned his back on a job with the sport's new owners in order to focus on McLaren - is realistic.

"No miracles were going to happen in 2017," he admits. "Most companies, any big decisions they are making are taken by October, November, December at the latest.

"2018 is when we need to deliver a title partner," he admits. "I already feel that pressure because it takes a year. So I am counting down the days.

"I haven't really seen any new sponsor announcements on any car," he added, "including those that have won the championship for three years in a row."