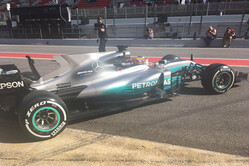 Under the previous management, known for its dictatorial style, strict rules in terms of access and what you could (or not) do once you got there were punitively enforced.

God forbid you try to gain access to a particular part of the track or paddock without the relevant pass(es) or worse try to take a picture, far less a video… even of your pass bore the name L Hamilton.

As pre-season testing gets underway, new owners Liberty Media have got things off to a good start by informing the teams that short clips of film of the drivers and cars could be taken and posted on the internet.

Such a thing was previously unthinkable, FOM enforcing a strict no private filming policy in order to protect the rights of broadcasters who had paid for the privilege.

Teams and drivers were quick to take advantage of the new age of entitlement following a letter sent out this morning, Mercedes posting footage of Lewis Hamilton prior to the Briton taking the W08 out on track.

Other teams soon followed, and not only were fans given almost instant access to the drivers preparing to go out, footage was soon appearing of cars passing the pits... even in slo-mo.

At a time many are still dubious about the motives and abilities of the sport's new owners, this is a good sign and one that should have been heeded some time ago.

Instead, little clips of film that might have helped encourage interest in the sport and weren't intended for profit but merely to entertain fellow fans were gleefully removed by the FOM lawyers.

And the policing wasn't limited to fans, with filming rights only available to broadcasters and FOM itself, even Lewis Hamilton was ordered to remove clips he had posted.