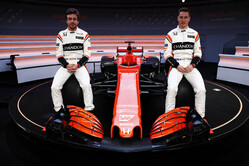 Speaking at today's launch of the McLaren MCL32, Yusuke Hasegawa, Honda's Head of F1 Project & Executive Chief Engineer, said that while he believes his power unit is almost on a par with where Mercedes was last season, he fears the German manufacturer has made further improvements over the winter.

Like Renault, with the throwing out of the disliked token system, Honda has taken the opportunity to produce a new engine, McLaren Technical Director, Tim Goss, letting the cat out of the bag earlier in the year.

"For 2017, the Honda engine architecture and layout have been altered to serve both for performance and packaging needs," he revealed. "The new power unit takes much of the learning from the past two seasons, but has been specifically redesigned for this season."

"Based on our two years of acquired experience and constant progress, Honda has made big changes to the concept and layout of our 2017 power unit, the RA617H," confirmed Hasegawa today. "The main areas of change that we focused on has been to decrease the weight and lower the centre of gravity, so as to improve the balance of the car, while generating more output from the ICE.

"Also, owing to the new 2017 regulations fundamentally affecting the design of our new car, we have made a lot of changes to accommodate the updated chassis."

Asked today, if Honda is now on a par with Mercedes 2016 performance, Hasegawa was quick to admit: "Not at the moment.

"I feel we are not far behind," he added, referring to the German manufacturer's performance at the end of 2016, "but I think we will catch up with them by the beginning of the season."

Following claims that the German manufacturer has itself made further improvements, he said: "I heard they did a very great job, which is very unfortunate.