Basic order might not be clear until China or Bahrain 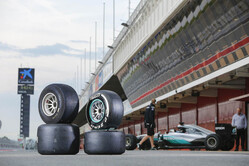 Pirelli's Paul Hembery admits that it might be Bahrain before we get an idea of who's hot and who's not.

Despite the promise of faster, more aggressive cars, Pirelli has always tried to play down fans' expectations for the opening races.

With testing of the basic 2017 compounds restricted to three teams, all using mule cars that could not accurately replicate the expected changes this year, Pirelli has admitted that in many ways pre-season testing will be a step into the unknown.

In light of the changes and the two four-day pre-season tests, the first time all the teams get to try the new wider tyres, the Italian manufacturer is warning that it might take a couple of races before we get a true idea of the pecking order.

"We really won't know in Barcelona where the teams are as that's a period where they won't want to show their hand," he admitted at an exhibition in Birmingham.

"There will be people trying to hide their true performance level or maybe wondering what they need to do because they can't get close to some of the teams who are possibly sandbagging," he warned.

Asked if the opening race will provide some answers, he suggested that Melbourne is notorious for throwing up "strange results".

"It will be when we get to China and Bahrain before we see the true performance of the cars," he said.

Explaining the issue with the mule cars last year, he said: "The problem is that we were testing with cars that are five seconds slower than what we're actually going to see in Barcelona. From a compounding aspect, it is a bit of a challenge because it's a very small window we're working with. If the numbers aren't what we have been told they are going to be, then we might have been a bit too conservative."

With drivers and teams unhappy with the performance of the (2016) wet tyres, Pirelli is seeking to carry out some further development work of its own.

"We're working on an on-going development during the season, which is something we're allowed to do this year as before we weren't allowed to test," he revealed. "In the last three years, we had three days of testing. Now we have up to 25 car days in a season, so we have a programme to change the wet tyres during the season.

"We want to improve the warm up characteristics," he continued. "We're going to have standing starts, so the tyres are going to be cold. Like we do in GP2, where you don't have blankets, we have to try and get a product which warms up a lot quicker. Those tests will be in February and March.

"We're trying to get one of the hybrid cars which we used in the last months of last year and trying to convince one of the teams to get it out of the museum and allow us to do a bit more work," he admitted.