Wolff and Lauda hit out at Verstappen 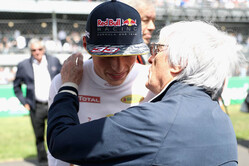 Mercedes bosses Toto Wolff and Niki Lauda have hit out at Max Verstappen following another race in which the young Dutch driver was at the heart of the action… and the controversy.

While most attention focusses on the late duel with Sebastian Vettel, the Mercedes pair are mainly angry at the first corner incident where Verstappen clashed with championship leader Nico Rosberg and a subsequent incident later in the race.

"I think it’s very refreshing how he drives," said Wolff, "his driving is ruthless and I like that.

"I think the team gave him a radio call when he was catching up that said ‘keep it clean with Nico’ and this is exactly what I would have said to him. You don’t bang wheels with the championship leader three races from the end of the season.

"The team have given him the guidance but maybe in the car when the visor is down it’s different," he sighed.

Three-time world champion Lauda was a little more forthright, the source of his anger the clash at the start.

"Nico clearly was in front and Verstappen rams him off the track," said the Austrian. "This could have cost Nico the championship. This is not acceptable.

"His talent is unbelievable," he admitted, "but then he smashes it all with these stupid actions. A repeat offender like him has to be penalised. Helmut (Marko) should talk to him.

"If Verstappen wouldn't drive that aggressively, he would develop much better," he continued, "he doesn't realise. He thinks he is doing everything right but he doesn't. He has to calm down.

"I don't know where this arrogance comes from. I don't understand. This is a lost cause. The fury of the other drivers just gets bigger and bigger."