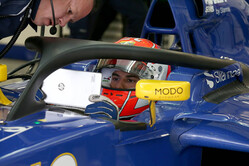 During the first practice session the Sauber F1 Team tested the halo system (cockpit protection) for the first time on Felipe Nasr's car. The Brazilian lost track time after riding over the kerbs at the exit of Turn 11, which caused front wing damage. The mechanics did a great job to get his car ready for three laps before the end of the morning session. In FP2 the Sauber F1 Team was able to pick up its programme with the usual race preparation - short and long-runs on different tyre compounds. In total, Marcus Ericsson (59) and Felipe Nasr (55) completed 114 laps.

Partner News: For its home race, Interproteccion will be a Race Partner of the Sauber F1 Team at the 2016 Mexican Grand Prix. The logo of Interproteccion, a Mexican group of companies specialising in insurance brokerage, will be visible on the upper sides of the sidepods of the Sauber C35-Ferrari.

Marcus Ericsson: "It's been a productive day. We had two problem-free practice sessions during which we have tried different car set-ups. After analysing all the data tonight, we will know more about which way to go for the rest of the weekend. All in all it has been a little bit difficult to get a good read of the car, because of the low grip conditions as well as rather low temperatures, but this is the same for everyone. We need to find a way to get the car to work at its best in these conditions. This will be the main challenge for us for the rest of the weekend."

Felipe Nasr: "We had a couple of issues today. I had a broken front wing after I ran over the kerbs at the exit of Turn 11, which caused damage to the car. Because of this incident, we lost quite a significant amount of time in the morning. Thanks to the mechancis, as they were able to put the car together again, I went out again for three laps at the end of FP1. Besides that, I have tested the halo system. It was okay to run it, and I did not have issues with driveability. It was just a matter of getting used to it. In the afternoon session I was compromised by traffic on my quick laps. On the long-runs we seem to have a decent pace on the medium tyres, which is positive."