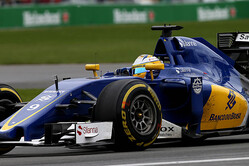 The Sauber F1 Team finished the United States Grand Prix in Austin in P14 (Marcus Ericsson) and P15 (Felipe Nasr). Both drivers were on a one stop strategy during the 56 lap race at the Circuit of the Americas. Now Formula One travels from the capital of Texas to Mexico City, where the Mexican Grand Prix will take place next weekend.

Marcus Ericsson: "I had a good start moving up to P13 after the first lap. It was a tough beginning to the race with some nice fights. On the soft tyres I had a decent pace. Then we decided to take a gamble and went for a one stop strategy. We knew it would be tight, but we felt that was the only chance to score a point. Therefore, my second stint on medium tyres was a long one, and so it was too difficult to keep the pace up in the end. All in all, it has been another decent weekend as we are taking steps in the right direction. We need to continue with that next weekend in Mexico."

Felipe Nasr: "Starting from the back we decided to choose the medium tyres for the first stint. I tried all I could to keep the car on track at the beginning of the race, as I had low grip on that tyre compound. As soon as we saw the data, we knew that we could extend the stint and switch to a one stop strategy so I did my best to stay out on track as long as possible. Because of the one stop strategy, I was able to recover some positions in the end."

Monisha Kaltenborn, Team Principal: "We have to choose different ways to get us in a position to score points. The strategy as well as the performance of our drivers was good. The team faced the difficult challenges well and put in a solid performance. Although we haven't scored a point yet, we are heading the right way. I want to thank the whole team for their efforts."