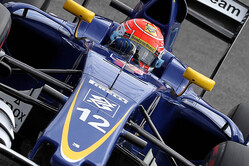 Following the purchase of the team by Swiss finance group Longbow Finance the Hinwil based outfit has made a number of significant signings as it still seeks its first point of the season.

Yet to name its driver-line up for 2017, it was anticipated that the team would seek the latest specification Ferrari unit next year, along with the works team and Haas, while Toro Rosso, which this year used the 2015-spec Maranello unit, switches to Renault.

However, talking to reporters at Suzuka, team boss Monisha Kaltenborn revealed that the Swiss outfit will use the final-spec 2016 engine.

"We took this decision a while ago, at a time where actually the rules for next year were not 100 percent clear," she said. "We took a strategic decision that we want to focus the resources we have on chassis development and performance development, and in a way leave the engine side to the areas we know. It is a strategic decision."

Kaltenborn was keen to dismiss the suggestion that development had been delayed due to doubts over the team's future.

Any suggestion that this was taken because we are delayed with our development is wrong," she said. "We are absolutely on plan. We have not suffered any delay, and through the change in ownership we now have the stability and the boost you need to step up.

"We are now stable, financially stable," she continued, "and we are improving on the scale of the team. We have new people coming up so there is no reason to think we can't keep up the pace of development that we want to."