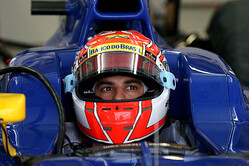 The practice sessions ahead of the Japanese Grand Prix went according to the scheduled programme for the Sauber F1 Team. In the morning the focus was on set-up work as well as aero measurements, while FP2 was mainly about the usual race preparation with short and long runs on soft and medium tyres. Marcus Ericsson and Felipe Nasr completed a total of 45 and 41 laps respectively.

Marcus Ericsson: "It has been a decent day. In the morning we tried different configurations on the aerodynamic side, which we have to evaluate more in-depth. Later on in FP2, I was a bit unlucky with the yellow flags, so it was difficult to get a feeling for the car on low fuel. The long run on medium tyres felt ok, but we need to have a closer look at the data."

Felipe Nasr: "It has been a productive day here in Suzuka. FP1 was mainly about testing different set-ups in order to get a better read for the balance of the car. In the afternoon we concentrated on short and long runs on different tyre compounds for qualifying as well as race preparation. Now we have to analyse the data collected, so that we can find improvements for the rest of the weekend."