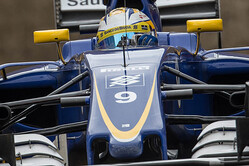 The Sauber F1 Team finished the Malaysian Grand Prix, the hottest race of the season, with one remarkable athletic performance and one retirement because of a technical issue:

Marcus Ericsson's drinking system stopped working after the first of 56 laps with cockpit temperatures up to 60 degrees. Nevertheless, he managed to finish in P12. Felipe Nasr was running in P13 when he had issues with the brake-by-wire system, which forced him to retire on lap 47. The Japanese Grand Prix will take place next weekend in Suzuka.

Marcus Ericsson: "I am satisfied with my performance today. I had quite a good start and was able to make up some positions as I had a decent pace throughout the race. We have clearly made progress on the car side, which brings us closer to the midfield. Obviously, we were aiming for points, but we were not close enough today. By the way, my drinking system was not working, so I had to go through the whole race distance without any liquids. That was really tough! For the upcoming race weekends we need to keep up the good work. I am really looking forward to Japan, because it is my favorite track. I cannot wait to get there."

Felipe Nasr: "It was not a good day for me. After the start, in Turn 1 Nico (Rosberg) spun and I had to avoid running into him. I lost some time because of this incident. After that we were able to recover quite well and went for a one stop strategy. Unfortunately, I then had issues with the brake-by-wire system, which forced me to retire. There are still some positives to take from this weekend. Now I am looking ahead to the upcoming race weekend in Suzuka."

Monisha Kaltenborn, Team Principal: "We knew that it was going to be a difficult race. However, the team did a good job. We choose the right strategies and both drivers did their best to get the maximum they could. However, Felipe was unfortunate. That was a solid performance today, which makes us confident about scoring points in the next races."