The return of Tooned 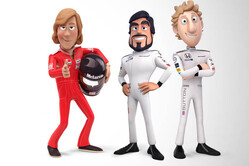 Despite the (often) negative press and the grey corporate facade, Ron Dennis is a man who eats, sleeps and breathes the sport.

Like the great Ayrton Senna, who won three of his titles with McLaren, racing is in Dennis' DNA.

Be it standing inches away from a mighty Can-Am car as it is fired into life, a schoolboy grin writ large across his face, or hunting down the first car of the man who founded the team, Dennis is deeply passionate about the sport and McLaren.

It is with this passion and history in mind that McLaren, in honour of this year being the 40th anniversary of James Hunt's title winning season, the team has released one of its enjoyable 'Toons' in honour of the event.

Be it Jenson Button calling Fernando Alonso his little chorizo, the Spaniard reclining on his lounger 'places I would rather be' or the Carry On innuendo, it a pleasure from start to finish, guaranteed to bring a smile to the face.

The three-minute video updates the Hunt feature, voiced by James’ son, Freddie, which originally aired in 2013, as part of McLaren’s 50th anniversary celebrations.

With cameos from Murray Walker and Alexander Armstrong, the new edit retains all the spontaneity of the original, and even includes a cameo from Stoffel Vandoorne.