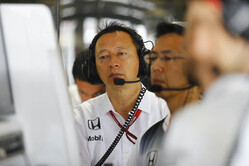 Fernando Alonso: "The Circuit of The Americas is a big challenge for every car - each sector offers something completely different. The first section requires a lot of precision, as it's a big climb up to the first corner, which you go into blind. The elevation changes put a lot of pressure on the car and it's important to get good traction out of each corner. It's a really exhilarating circuit to drive and you need to work hard at every braking point to keep good momentum around the circuit, as the rhythm is constantly changing along with the elevation as you go around the lap."

"It's great to go back to North America - Austin is a really cool place and I'm pleased we're returning there after a bit of uncertainty following last year's event. It's a grand prix in which you never really know what to expect, and I would say that last year I had one of my favourite races because, despite having a puncture on lap two, we were able to push and make progress through the field, which was hugely satisfying from behind the wheel. The weather can always give us a few surprises and the track temperature often changes a lot from session to session, so I hope we can find a good set-up early on and improve our pace as the weekend progresses."

Jenson Button: "COTA is one of the few anti-clockwise circuits on the calendar, and has a bit of everything: fast corners, slow corners and heavy braking zones, so you need a car with good balance, which tends to be one of the strengths of our car. There's lots of fast, sweeping corners in the first sector, the long straight in the second sector, and then the infield section in the final sector which is tight and twisty with long apexes and high g-forces. You really need to prepare the car for everything! For a driver it's great fun and I hope we enjoy a better result there than in Suzuka."

"I'm looking forward to heading back to Austin. I've been spending more and more time in the States recently and Austin is a city with passionate fans that really love their racing. The atmosphere downtown is really relaxed and we usually take the opportunity to sample the famous Texan cuisine in one or two of the restaurants over the course of the weekend. I've always liked racing at this circuit and we managed to put up a good fight last year despite not having the best outright pace, so I'm hoping for more of the same and a bit of a boost after the disappointment of our result in Japan."

Eric Boullier, Racing Director: "It's no secret that we didn't achieve the results we were looking for at Suzuka, and since returning from Japan we've been working hard to find the appropriate solutions to avoid a continuation of this in Austin. The Circuit of The Americas is a very different challenge in its configuration, so we hope we'll be able to see improved performance there. However, we mustn't be complacent, and instead keep fighting hard as we have been all year to get the best out of our package and its strengths as we head into the final back-to-back races of the season.

"Achieving a delicate compromise to suit the varying demands of this track - fast corners, slow corners, and a long straight - will be the key to maximising our performance, and we'll be working hard to find the right balance and set-up as soon as we hit the track on Friday. The first few sessions are always unpredictable as we dial in the car to the ever-changing temperatures at different times of the day, and the autumn weather often gives us the opportunity to throw any dry-weather run plan out of the window!

"Everyone at McLaren-Honda is very pleased to be returning to Austin for the United States Grand Prix. It's fast becoming a classic racetrack, there's a great atmosphere, and the fans' love of racing is palpable throughout the weekend. We always receive a very warm welcome from the Austinites and the US is a very important market for us to bring our show to every season. I hope we can provide more great racing for the crowd again this year and give our fans something to be proud of."

Yusuke Hasegawa, Honda R&D Co Ltd Head of F1 Project & Executive Chief Engineer: "After an intense Asian round of races, we now head off to the Circuit of The Americas where the racing is tight and we see good overtaking on track, making for interesting racing. There is plenty of variation on track with great hard braking corners, an undulating 'S' curve and slow twisting turns, so it will be important to us to refine and tune the power unit properly for each of these sectors.

"McLaren-Honda had good race here last year, and we hope we can do the same to target finishing in the points."

Circuit of The Americas

DRS zones: Two, on the approach to Turns One and 12

Key corner: Turn One. The apex of this left-hander is the highest point on the lap and the steep uphill approach allows the drivers to brake very late. The corner is blind, requiring precision and commitment from the drivers, and a good exit is vital because a high-speed section follows

Major changes for 2016: None, except for maintenance work on kerbs and Astroturf

Fuel consumption: 1.89kg per lap, which is average

ERS demands: ERS is deployed for around 35 percent of the lap, which is average. There are several heavy braking areas in which to replenish the battery

Brake wear: Medium. There are 10 braking zones, but only four of them are heavy. Just 14 per cent of the lap is spent on the brakes

COTA is the 10th grand prix venue in the United States, but the first purpose-built F1 facility. It staged its first grand prix in 2012, since when it has been a regular fixture on the calendar. Last year's race was memorable for the monsoon-like weather conditions, which led to qualifying being abandoned.

What makes it unique: Its eclectic mix of corners. COTA has more fast corners than Spa-Francorchamps and more slow corners than the Hungaroring - a combination that makes this track a huge challenge for both engineers and drivers.

Run-off: Good. The track is one of Hermann Tilke's latest creations and it has ample run-off - as befits a modern grand prix circuit.

Watch out for: The temperature. In October it gets quite cold at night, yet the midday sun pushes the temperature into the high-20s. This means the temperature swing is extreme, at least in a Formula 1 sense, and that makes it hard to balance the car from one on-track session to the next.

When to press record: The start. It's only a short run to Turn One, but the 40-metre climb to the apex invites drivers to brake very late. It's possible to run side-by-side through the corner, so there's usually plenty of excitement

Don't put the kettle on: Despite the mixed weather conditions and the high number of incidents last year, the race was won using a two-stop strategy. Lewis Hamilton started the race on Intermediates, then completed two stints on the Soft tyre. Sebastian Vettel, in third, was the highest-placed three-stopper

Tyre choices: Supersoft/Soft/Medium. This is the 10th occasion that this combination has been used this year