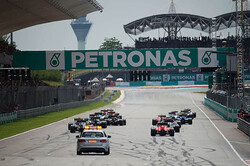 Nico Rosberg: Singapore was a perfect weekend for me. I felt great in the car, had a fantastic qualifying, made a strong start and then came out on top after a really intense battle with Daniel (Ricciardo) at the end of the race, which made the win all the more fulfilling. The team did such an impressive job understanding what went wrong last year and turning it around. I'm massively proud of everyone for that. It's an incredible position to be in as a driver, knowing you have a shot at winning every weekend. I won't take it for granted. I've had a good run lately and I'm enjoying the moment. But as far as the next race goes, or the next one after that and so on... it's anyone's game. Red Bull and Ferrari are both pushing us really hard, so there will be some tough weekends ahead. It's exciting for the fans and pushes us even harder to keep improving, so that's a great thing. Malaysia didn't work out perfectly for us last year, so if we can win it this time against such tough opposition that would be really awesome. I can't wait to see all the guys from Petronas who work so hard to give us that extra competitive advantage and hopefully give them something to cheer about at their home race.

Lewis Hamilton: Singapore was a difficult weekend for me, so to come away with a podium in the circumstances was pretty good damage limitation. Ultimately, Nico did an exceptional job and I didn't have my best weekend. But that's the way it goes. We're both fiercely competitive. Some weekends he does great, some weekends I do great. It's a combination of things that all come together to make a strong weekend and every one is different. I have no idea if the momentum will swing back to me or when it might. But we still have six races left, so I just have to keep giving it my all and hope for the best. That's all you can do as a sportsman. It's going to take some good results to get back in front and stay there - but I've had plenty of those in the past, so there's no reason to think they won't come back to me again. Sepang is my first shot at it and I'm really looking forward to getting out there. It's a track I usually go pretty well at - plus we have some really fantastic support from the Malaysian people, including all the guys and girls from Petronas. It should be a great weekend, so if we can get a result to match that would be awesome. Let's see how it goes...

Toto Wolff, Head of Mercedes-Benz Motorsport: We saw Formula One at its best in Singapore. Just like in football, where you have good games and bad ones, this was a classic. I'm proud of the team for how we bounced back after last year and we take our hats off to Red Bull and Daniel (Ricciardo) too, as they made it a huge battle. This is how Formula One should be and, although it was extremely tense, I thoroughly enjoyed the race. Now we go to Malaysia, which is a big weekend for us. To win in what feels like our second home, in front of thousands of friends and partners from Petronas, would be very special. But, like Singapore, this was a race where we underperformed last year, so we will need to push hard to put that right. We can guarantee that the drivers will be doing just that. This year more than ever, we've seen that they are pushing each other to new heights. We're entering a gruelling phase of this record 21 race season, where the physical and mental challenge of a Championship reaches its absolute peak. We're in good shape - but we must remain on our toes to get the ball over the line.

Paddy Lowe, Executive Director (Technical): We're all very much looking forward to Malaysia. With Kuala Lumpur being the home of Petronas, we very much see this as one of our home Grands Prix. In 2015 we didn't manage to secure the win, which was hugely disappointing to us, so we have all the more motivation to come back and get it right this time around. Focusing on the technical aspects of the circuit, it's a very challenging weekend. The heat and humidity make life tough for drivers, team and cars alike, while the track action can often be affected by rain, which tends to be very heavy and arrive very suddenly. As such, we've seen some very eventful races in Malaysia over the years. The nominated tyre compounds for this event are the hard, medium and soft, with the unusual scenario of the hard as the obligatory race compound - meaning that, if the race remains dry, every driver must use that tyre. The characteristic of the circuit itself is more 'normal' than that of Monza or Singapore, which were more focused on more specific areas of car performance. Sepang places an even emphasis on power, aero efficiency and mechanical grip, so we're looking forward to seeing how we fare and aiming to put in a strong performance for the Malaysian fans.