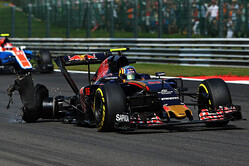 While the Faenza outfit expected to hurt at the majestic Ardennes track, and again next week at the all-power Autodromo Nazionale in Monza, citing its 2015 Ferrari power unit as the cause, Carlos Sainz, who suffered a spectacular tyre failure on the opening lap, believes the team's woes go beyond its engines.

"We clearly have limitations on the power unit side but that is something we expected and something we were prepared for," he told reporters. "We brought an upgrade to Hockenheim to compensate for the power loads that we are losing but it looks like, since Hungary, we were not performing as we should be."

"There are some question marks in the air at the moment with the team to see why we are not taking the steps with the performance," Sainz admitted. "Hockenheim shouldn't have been such a tough track for us and it was similar to here really.

"We look at the data and see that we are not performing in the corners that we used to perform," he continued. "I am not blaming the package at all, it could be something we cannot see in the data. In the same way that nobody understands Pirelli tyres, it can be very difficult to tell with the aero of a car.

"So I am not going to put the blame on that at all but it is where we need to look because we have dropped a lot of performance over the last two races. The team will investigate and hopefully we come up with a solution."