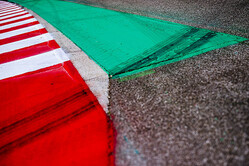 The FIA's zero tolerance approach to drivers exceeding the track limits will continue in Hungary this weekend.

While the track has been completely resurfaced, as was the case in Austria, like the Red Bull Ring a number of kerbs have been modified in an obvious attempt to deter drivers from running wide.

Revealing that a large number of the kerbs have been renewed, with an eye on improved drainage, the FIA has revealed that "in Turns 4 and 11, new double kerbs - as seen at Turn 9 at the Circuit de Catalunya - have been installed and the artificial grass removed.

"However," the FIA adds, "the run-off areas behind the kerbs have been set at the same height as the kerbs themselves, the required deterrent is therefore not present.

"With this in mind we have installed loops 1.6m from the track edge which will alert us when a car has all four wheels off the track in these two locations."

In other words, if drivers exceed the limits the stewards will receive a warning signal electronically.

Meanwhile, the 'sausage' kerbs on the apex of Turns 6 and 7 have been replaced by a 50mm high 'Abu Dhabi' kerb on the apex, behind the 50mm positive kerb.

The crackdown on drivers running wide began in Austria and continued at Silverstone where a number of drivers, including Lewis Hamilton in Q3, had their times deleted after running wide in specific corners despite the stewards' warnings.