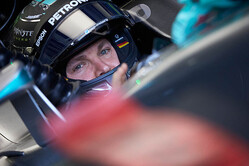 Mercedes has announced that it will not now appeal the Silverstone stewards decision which saw Nico Rosberg handed a 10s penalty.

The German team lodged an appeal yesterday in the wake of the penalty - meted out after Rosberg was deemed to have received advice illegally - which meant he was demoted to third, behind Lewis Hamilton and Max Verstappen, and his championship lead reduced to just one point.

However, tonight the team issued a statement confirming that it has withdrawn the appeal.

The Mercedes AMG Petronas Formula One Team today decided to withdraw its notice of intention to appeal against the decision of the Stewards of the British Grand Prix.

We were able to prove to the Stewards that a car-stopping gearbox failure was imminent and, as such, were permitted within the rules to advise Nico of the required mode change.

However, the advice to avoid seventh gear was considered to breach TD/016-16, and therefore Article 27.1 of the Sporting Regulations.

The Team accepts the Stewards' interpretation of the regulation, their decision and the associated penalty.

During the coming weeks, we will continue discussions with the relevant F1 stakeholders on the subject of the perceived over-regulation of the sport.