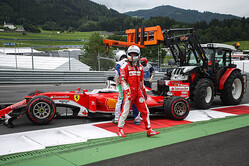 Investigation by Pirelli suggests "an item of debris" was responsible for Sebastian Vettel's Austrian tyre failure.

The German was running second in last Sunday's Austrian Grand Prix when his tyre detonated on the run to the first corner on lap 26.

Whilst Pirelli initially tweeted that it believed the cause was debris, it subsequently launched an investigation along with Ferrari, though the task was made that more difficult by the amount of damage done to the tyre and how little of the carcass remained.

Claims that Ferrari had left the German out on the supersoft tyres for too long were dismissed by the team and Pirelli, with Vettel totally baffled.

"There's a complete question mark why the tyre failed," said the German. "It was our decision to run long, it was clear that everybody had much more tyre life than expected going into the race. Nobody came in during the first ten laps.

"27 laps is not that much on that compound," he continued. "Kimi did more than 20 laps on the ultrasoft, there were other people who went longer on the supersoft.

"Out of nothing, it exploded. There were no signs before that, everything was normal, there was no change in pace from the lap before and I didn't go off anywhere."

According to Pirelli, following its investigation, which has been concluded and the results shared with Ferrari: "The few remaining parts of the tyre in question, together with an in-depth comparison to other tyres used in the race, reveal no signs of fatigue or structural failure in the right-rear tyre itself.

"Consequently, the issue appears to be caused by an item of debris, which led to the breakage of the tyre."