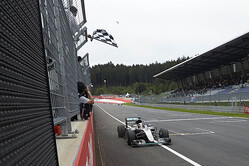 Mercedes boss Toto Wolff admits he is thinking of introducing team orders to avoid a repeat of controversial Austria clash.

In the wake of the last lap incident which almost saw both of his cars eliminated, Mercedes Motorsport boss Toto Wolff was apoplectic.

Smashing his fist on the counter in the team garage as he watched events unfold on a monitor, alongside non-executive team chairman Niki Lauda and team PR boss Bradley Lord, the Austrian was still clearly very angry several minutes later when he described the incident as "brainless".

Whilst the stewards handed Rosberg a ten second time penalty which allowed him to keep his fourth place, along with two penalty points and a reprimand, Wolff was left to deal with this later PR disaster for the German team, which comes just weeks after the pair eliminated one another on the opening lap in Spain.

Following the Spanish incident indeed, following the many previous clashes, Wolff had insisted that he and his team want to keep the racing pure and his drivers to race, and fight, rather than issue team orders.

Yesterday's clash may have forced his hand.

"At Barcelona I was much more at ease with it," said Wolff in terms of the pair's Spanish clash. "We'd had thirty races without collision.

"It was clear it was eventually going to happen," he admitted, "it wiped out both cars and from my naive thinking I thought to myself: 'OK, they've learnt their lesson, seen what the consequences are and it's not going to happen any more'. But here we go again. So the only consequence is to look at all the options and one option is to freeze the order at a certain stage of the race, which is unpopular and makes me want to puke because I'd like to see them race, but if the racing is not possible without contact, that's a consequence."

Asked if Hamilton and Rosberg, who is out of contract at the end of the season, would obey such orders, Wolff's reply was instant: "Yes," he snapped, "in capital letters."

With Silverstone, Hamilton's home race, just a few days away, Wolff admitted that he didn't want to rush to a decision that would impact not just his team but the outcome of the 2016 championship and also the 'entertainment value' of the sport, should one driver be told to yield to the other.

"We have to cool down a bit," he continued, "next thing I'm going to do is put my head in a bucket of ice, and in the next couple of days we will know.

"Because there's a race next week we need to discuss internally with all guys involved how we want to manage the situation going forward.

"We will make the decision irrespective of what they say," he admitted, referring to his drivers. "It's the core race team that's going to make a decision and it could go either direction. The outcome needs to be that we avoid contact between the two cars... everything is going to be on the table."

Nonetheless, despite the stewards' decision and video evidence that even the keenest Rosberg fans would find difficult to deny, Wolff was unwilling to apportion outright blame for the incident.

"I don't think it's really black and white," he said. "Nico was in a car that was handicapped, trying to brake late, and not on the line that was probably normal. And Lewis came from the outside. That's where the first contact was made. So what I'm seeing is it takes two to make contact.

"I don't want to attribute any blame because every time you watch the video and look at the onboard there is new information," he continued. "I have my personal opinion. I'm not going to express it here, as a matter of fact that needs to be avoided.

"Brakes were marginal, there wasn't a lot left. At the end of the second to last lap, Nico's brake-by-wire failed, so he had no electronic braking. It reduces the performance of the braking."

Speaking on the podium, where he was booed during the award ceremony, Hamilton said that he was aware Rosberg had a brake issue. The cameras picked up on Christian Horner, who was standing beneath the podium alongside Niki Lauda. Even as Hamilton said the words "brake problem", Horner turned to Lauda and smiled, as if to say, 'Yeh, brake problem...', the Briton having had to resort to similar PR spin during the Vettel/Webber era.