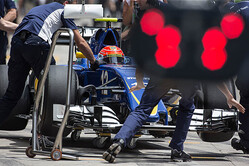 Sauber has announced that it will not take part in next week's two-day test at Silverstone, the Swiss outfit citing "cost effectiveness".

"As we introduce the C35 aero package at a later stage, testing in Silverstone is cancelled considering cost effectiveness," said the Hinwil outfit on Twitter this morning.

The team missed the post-Barcelona test also, admitting that as it had no updates to test it would be pointless to run.

Over the Spielberg weekend team members admitted to having a new investor on board, though the Swiss outfit has yet to officially announce anything.

"The situation seems to have got better from what I hear," said Felipe Nasr at the Thursday press conference, "it gives a boost to everyone back at the factory, and at the track. I'm sure we can soon start updating the car."

"For any details you have to ask Monisha," said team manager Beat Zehnder, referring to team boss and co-owner Monisha Kaltenborn. "Obviously there is a change in atmosphere because now everyone believes again that there is a future.

"The crucial thing was not to give up and I think we can be very proud of our team here on the track and at home that kept on pushing in our very limited areas. There was always light at the end of the tunnel - but as you know Switzerland has just opened the longest railway tunnel in the world - the light was always there, the tunnel was just massively long. The tunnel is getting shorter now."