Light at the end of the tunnel for Sauber 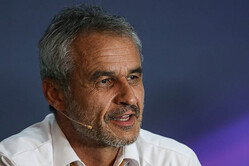 In recent days there have been reports that Sauber has secured an investment that basically guarantees its future.

There has been a question mark over the Swiss outfit's future for some time and team boss Monisha Kaltenborn has spent more time chasing potential investors (and buyers) in recent months than attending races.

Earlier this year it was revealed that the team was late in paying its staff's wages, then, as the C35 continued without updates, the team opted to miss the first in-season test at Barcelona because there was essentially nothing to test.

While the Swiss outfit is giving nothing away officially, leading to intense speculation as to whether Kaltenborn and Peter Sauber have sold some of their stake in the outfit, team members have confirmed that there are signs of hope.

"The situation seems to have got better from what I hear," said Felipe Nasr on Thursday, "getting all the employees' salaries paid gives a boost to everyone back at the factory, and at the track.

"I'm sure we can soon start updating the car," he added.

"Paying salaries definitely helps for the atmosphere in the team!" he said on Friday. "Paying the salaries, the outstanding salaries, is part of a comprehensive solution we were still working on but for any details you have to ask Monisha.

"Obviously there is a change in atmosphere because now everyone believes again that there is a future," he continued. "The crucial thing was not to give up and I think we can be very proud of our team here on the track and at home that kept on pushing in our very limited areas.

"There was always light at the end of the tunnel - but as you know Switzerland has just opened the longest railway tunnel in the world - the light was always there, the tunnel was just massively long. The tunnel is getting shorter now."

Asked how difficult is it to keep the team together under such circumstances, he said: "It's not always easy, it's for sure easier on the track because everyone who is here loves to do what they are doing, they love racing and so the motivation part on the race track is a simpler one than back home in the office.

"For the technical department, for the design office, sometimes it is quite frustrating, knowing you have things in the pipeline but you cannot bring it to the track because of financial reasons. But, as I say, there should be a brighter future."

Indeed, that brighter future includes some much-needed updates for the C35.

"We have some bits and pieces coming for Silverstone and then Hockenheim possibly," said Zehnder, "but then the concentration is fully on 2017.

"We still have the aim to be in front of the Manors and possibly beat the Renaults but realistically, we have to concentrate, as a small team, fully for 2017."