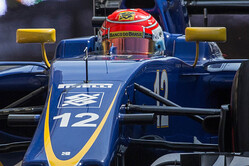 The Sauber F1 Team finished qualifying ahead of the European Grand Prix on the Baku City Circuit in P16 (Felipe Nasr) and P20 (Marcus Ericsson). Nasr qualified for Q2 at the grand prix debut in Azerbaijan's capital. Ericsson had traffic on his flying laps and had a slight brush with the walls.

Marcus Ericsson: "It was a disappointing session for me. It was a bit messy, as I had some traffic on the first as well as the second set of tyres. On my last try I was pushing to the maximum, and was a bit over the limit! It is a street track, so you need to be as close as possible to the walls. I was a bit too close and brushed them slightly, so I lost some lap time. It was a disappointing result for me. Nevertheless, I want to say a big thank you to my car crew. They have been working really hard this weekend to get me on track for every session. I will fight hard for them tomorrow."

Felipe Nasr: "Overall it was a good qualifying. First of all, I want to say a big thank you to everyone in the team. We put everything together today. In qualifying we managed to beat Renault and Manor, which is a good sign. I felt I pushed the car to the limit and the team made a good job timing-wise. We can be pleased that we made it into Q2. It is still far from what we want to achieve, but it is already a step forward. We will keep on fighting tomorrow in the race."