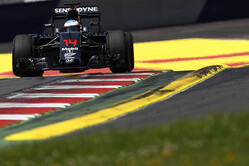 Despite calls from a number of teams and drivers, officials have opted not to make any changes to circuit's notorious new kerbs.

And while a number of drivers have expressed serious concern at the kerbs, Lewis Hamilton describing them as "dangerous", others, including Sebastian Vettel and Daniel Ricciardo, are in favour of them, insisting they do the job they are intended for, keeping drivers within the track limits.

Whiting subsequently confirmed that there would be no changes made, and that the worth of the kerbs, in keeping drivers within the limits, has been proven.