No further action on Hulkenberg and Magnussen 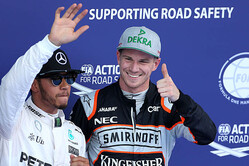 Whilst Rio Haryanto, Jolyon Palmer and Felipe Nasr have been handed grid penalties for tomorrow's race for failing to slow for the double yellow flags following Carlos Sainz' issue at the end of Q1, the Spielberg stewards have cleared Nico Hulkenberg and Kevin Magnussen of the same offence.

In Magnussen's case, the stewards deemed that the telemetry demonstrated he had decelerated on approaching the flag point and reduced his speed in the yellow flag sector.

In Hulkenberg's case, although the driver went “green” in the sector where the double yellow flags were displayed, his telemetry clearly demonstrated that he had decelerated on approaching the flag point and that his speed reduced in the yellow flag sector.

The decision means that Hulkenberg will start from the front row tomorrow alongside Lewis Hamilton.

Though the German qualified third, a grid penalty following a change of gearbox on Nico Rosberg's car sees the Force India driver promoted to second.