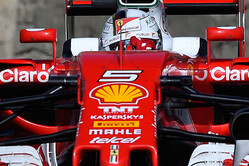 Following a bright and sunny FP1, the second session was compromised by a rain storm that meant there was no running for almost half-an-hour.

However, be it wet or dry, drivers have had problems remaining on the black stuff. Whilst the weather hasn't helped, nor has the fact that the track has been completely resurfaced, meaning drivers have problems generating significant heat.

To add to their woes, should they run wide there are new kerbs at almost every corner, and welcoming, deep, gravel traps.

While Lewis Hamilton admitted to being "way off the pace", there were no such issues for teammate - and winner of the last two races here - Nico Rosberg who unofficially shattered Michael Schumacher's long-standing lap record.

While the first session saw Mercedes and Ferrari as the main contenders, ahead of Red Bull, Toro Rosso and Williams, the second, with its difficult conditions, saw Nico Hulkenberg up in third and the McLaren duo looking good.

Though this morning's session looks likely to be run in perfect conditions, there is a threat of further rain indeed, thunderstorms, this afternoon and again tomorrow.

The lights go green and Wehrlein leads Gutierrez out on to this beautiful circuit.

Hamilton is among the early risers, the drivers on a mixture of all three compounds, ultra, supersoft and soft.

While most driver head back to the pits, Ericsson posts the first time of the morning, the Swede crossing the line at 1:12.348. Moments later teammate Nasr posts 12.418.

Vettel gets things a little more serious with a 7.797, just a shade over Rosberg's best yesterday (7.373) and a sign of what we can expect this afternoon, weather permitting.

Indeed, Raikkonen posts 7.977 to go second, Ferrari having used another engine token this weekend, understood to be related to the camshaft.

Despite losing time behind Haryanto, Vettel improves to 7.307, while Verstappen goes second with a 7.865.

Hamilton's first lap sees the Briton go sixth (10.591), the Briton having run wide at T8. Indeed, next time around he goes wide again.

Ericsson complains his car "is not drivable", the Sauber lagging when he applies the throttle.

TV cameras pick up on massive blistering to Hamilton's rears. "Look at my rears," he tells his team. Told to continue, he replies: "I'm going to go off." Worryingly, the ultras in question have only done 8 laps. He pits.

A massive lock-up for Ricciardo in T2, leaves the right-front visibly vibrating.

Perez joins the long, long list of drivers who have gone off at T8, the warmer temperatures not helping.

Raikkonen retakes second with a 7.558.

Ricciardo improves to third with a 7.798 ahead of Massa and Verstappen, the Mercedes duo are currently 14th and 17th. Bottas and the McLaren duo yet to post times.

"Something is going to break," warns Gutierrez, "I have a bad feeling." Shortly after he runs wide at T2. The Mexican is currently eighth.

Despite a PB in S1, Vettel fails to improve over the next two sectors as the McLaren duo go 11th (Alonso) and 12th (Button), both over 1.5s off the pace and both on the supers.

At halftime, it's: Raikkonen, Vettel, Ricciardo, Bottas, Massa, Verstappen, Hulkenberg, Gutierrez, Grosjean and Alonso. The Mercedes duo are in 17th and 20th positions.

Whilst there is clearly an issue with tyre graining on the Mercedes, one has to wonder whether it is as bad as it appears or is the team looking ahead to Sunday. Then again, we know from experience (Singapore 2015) that when the German team has a bad weekend it is a bad weekend.

Rosberg begins a flying lap on a new set of ultras. He goes quickest in S1 but runs wide in T2, spins and hits the barriers.

The German climbs from his car, watched on by a concerned looking Niki Lauda and Toto Wolff.

Replay shows the left-rear suspension appear to break on the exit of T2, the German only partially touching the track limit, sending the into the barriers and thence a wild spin.

Back in the garage, Rosberg looks angry, he's not even talking to Wolff or Lauda.