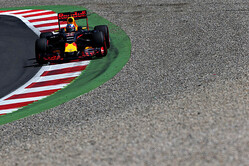 As the F1 circus returns to Europe from, er... Europe, there is plenty to get us excited today.

Having taken a new engine, Lewis Hamilton is now on his fifth of the season, and therefore facing penalties at future races.

Ferrari is to try the latest incarnation of the Halo device this morning, the new version, smaller and made of Titanium, dubbed Halo 2.

A number of teams have updates, not least McLaren which has a controversial new rear wing, whilst there is talk that Sauber has been given a significant financial boost.

Then there's the ongoing talk in terms of who goes where, not to mention Bernie Ecclestone's intention to shake up the prize money allocation.

And as for the circuit, not only has the entire track been resurfaced, almost every corner has been given new kerbing in an attempt to prevent drivers cutting corners and exceeding the track limits.

Finally, as if all that wasn't enough, there is talk of thunderstorms over the weekend, including during qualifying.

The only reserve (third) driver on duty today is Alfonso Celis who replaces Sergio Perez.

Tyres available this weekend are ultrasoft, supersoft and soft.

One by one they head out, one by one they return... all except Verstappen that is, who posts the first time of the weekend (1:11.707) despite a wobble in T2. All but Vettel and the Mercedes duo have appeared thus far.

As Wehrlein heads out for a second run, Verstappen improves to 10.099. The Manor driver subsequently posts 12.737.

Vettel heads out twelve minutes into the session, but no halo. Indeed, the device is outside the Ferrari garage leaning against a barrier.

Fifteen minutes in, Rosberg is the first of the Mercedes drivers to head out, teammate Hamilton following shortly after.

Having posted a 10.649 on his first lap, Rosberg makes a mistake and runs wide in T1 at the start of his second. Hamilton, taking a cautious approach, posts 18.019.

Interestingly, Rosberg has warned that the new track surface will cause problems this weekend, particularly in terms of tyre warm-up.

Hamilton goes second with a 9.885, as Raikkonen goes fifth and Vettel eighth.

The Briton subsequently improves to 8.808, which puts him within touching distance of Michael Schumacher's outright lap record.

The Virtual Safety Car is deployed after Hamilton and Grosjean both spin at T8. Elsewhere, Raikkonen complains of 'throttle hesitation'.

As Vettel goes off at T1, the cameras cut to the rear wing on Alonso's car, which has the appearance of an Italian - read stylish - colander.

As Raikkonen complains of "sand" (?) on the track the camera picks up on a piece of front wing endplate on the pit straight. It is subsequently revealed that it was ripped from Verstappen's car when he ran over the kerb at T8.

In quick succession, Gutierrez, Grosjean, Bottas and Palmer run wide, Turns 1 and 8 catching out everyone this morning.

Phew! A very close moment for Ricciardo who has to run wide in T8 as he avoids Ericsson who wobbles as he enters the pitlane and strays across the white line.

The Australian is magnanimous, saying it wasn't the Swede's fault rather the "nature of the track".

Nonetheless, the stewards are investigating the incident.

After forty minutes, at which point the drivers have to hand back a set of tyres, it's: Rosberg, Hamilton, Ricciardo, Vettel, Verstappen, Raikkonen, Bottas, Button, Kvyat and Massa.