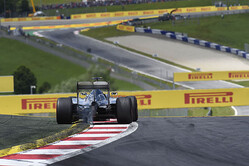 In all its various guises, the undulating, sweeping nature of the Red Bull Ring has encouraged drivers to explore the outer limits of the track... and then some.

Having completely resurfaced the entire track, officials also took the opportunity to add new kerbs to just about every corner in an effort to prevent drivers gaining an illegal advantage, be it running wide or cutting corners.

Finally, additional run-off has been provided straight on in Turns 1, 2 and 8 as well as on the right entering Turn 3.

Which by our reckoning leaves Turn 4 as the only corner to have escaped treatment.

In 2014, the year F1 returned to Austria, Turn 8 became a particular bugbear with more than half the drivers having their initial qualifying times deleted for running wide there.