Drivers have mixed views on kerbs 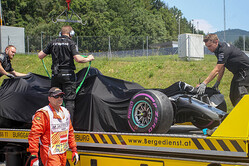 Whilst Lewis Hamilton has said that the kerbs at the Austrian circuit, which are responsible for a number of suspension failures this weekend, are dangerous, Daniel Ricciardo believes they do the job they are meant to.

Following a qualifying session which saw Daniil Kvyat crash out after a suspected suspension failure after going over the kerbs, and a similar, though less spectacular failure for Sergio Perez, pole-man Hamilton declared the new kerbing "dangerous".

"I can't speak on behalf of all the drivers, but for me those yellow kerbs are quite dangerous," said the Briton, whose teammate, Nico Rosberg, crashed (pictured) in this morning's practice session after the kerbs damaged his rear suspension. "We've now seen a couple of incidents already. I don't know how many more of those it's going to take before a car ends up in the wall and perhaps someone gets hurt.

"I'm sure Charlie (Whiting) and the FIA are looking at it," he continued, "but that's definitely an area we can improve.

"The idea is good, because they definitely don't want us running wide and using the outside of the circuit but perhaps another solution is going to be needed."

His view was not shared by Ricciardo, who said: "I'm honestly treating it like a wall, I know that if I hit it I'm going to damage my car.

"It's not a bullying scenario," he added, "I'm not laughing at them, Danny or anyone that's crashed. For me I like that it's black and white. At so many modern circuits us drivers complain that you can run off and not pay a price, so this weekend we are paying a price. Sure, the damage to the cars is quite severe, but it's the same if you hit a wall on a street circuit, I tore the rear off my car in Baku.

"They're visible," he added, "it's not like we can't see them. I honestly think they're doing a good job, and I think it's a good compromise to keep us on the track limits."

Former teammate Kvyat, who brought out the red flags when he crashed out of Q1 after running wide in T8 and damaging his suspension, deemed the kerbs "stupid".

"They should take them off," demanded the Russian. "They've done a mistake, they have to admit that it's stupid.

"Last year we had Astroturf at that corner, which is completely fine, you lose time," he continued. "Now if you go on the kerb you continue because you don't lose time, but the suspension fails."

His view was shared by Max Verstappen, who fell foul of the new kerbs twice yesterday but failed to get support from his fellow drivers in calling for them to be removed.

"All the drivers were very happy with the kerbs, so maybe now they're not so happy," he said. "You could clearly see what happened today and I experienced it yesterday."