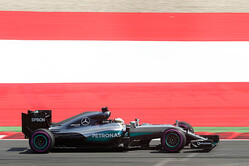 It's fair to say that even though we've only had three practice sessions thus far, the Austrian Grand Prix weekend has already provided more incidents and talking points than a number of previous races combined.

Even before the possible intervention of the weather gods, who are thought to be considering playing their hand either late this afternoon or tomorrow, we have Nico Rosberg and Sebastian Vettel hit with grid penalties.

The Ferrari driver gets his penalty after Ferrari opted to change his gearbox after finding iron filings within it, even though he successfully completed the race in Baku with it.

Rosberg's penalty is also for a gearbox change, the German having damaged his original unit in the crash following his suspension failure earlier.

As it happens, Rosberg was the pace-setter in both session yesterday, while Vettel was the man to beat earlier.

Kimi Raikkonen has been looking good all weekend and was second quickest this morning, whilst Lewis Hamilton, who was advised not to run as the team investigated Rosberg's incident, ended the morning third quickest, only marginally off Vettel's pace.

The Red Bulls of Ricciardo and Verstappen were next up behind the Ferraris and Hamilton, followed by the Williams duo, with force India and McLaren effectively completing the top ten.

It's fair to say that everyone has been off at some point or another, therefore, weather gods or not, we can expect plenty of surprises and errors over the next hour and tomorrow.

Ahead of Q1, the air temperature is 26 degrees C, whilst the track temperature is 50 degrees. It's even warmer than earlier, and therefore we are likely to see a bit more pain for some teams.

Understandably, the Mercedes crew have been working throughout the break to ensure that Rosberg gets out, even some of Hamilton's mechanics helped out. Incidentally, Mercedes has strengthened the rear suspension on the Briton's car as a precaution.

The lights go green and Palmer leads the way, followed by Magnussen, Wehrlein, Sainz, Haryanto and Ericsson. All are on the ultrasoft rubber.

Palmer posts 9.156 but this is instantly beaten by Wehrlein, Sainz and then Magnussen who crosses the line at 8.600.

As Sainz, who missed much of this morning's session with an overheating issue, necessitating an engine change, posts 8.104 to go sixth, Rosberg climbs into his car.

"I've had a suspension failure," warns Perez , who has dropped to sixth. Indeed, it's an upper wishbone failure.

Rosberg is on track... superb work by the Mercedes crew.

Supreme effort from Rosberg who immediately goes quickest with a 6.690.

Verstappen goes fourth (7.131, ahead of Bottas and Raikkonen, as Sainz hovers above the drop zone, which is inhabited by teammate Kvyat, Grosjean, Ericsson, Wehrlein, Nasr and Haryanto.

With most of the field opting not to run again, Perez could be safe. The Mexican is currently 11th as the team work on his suspension.

A magnificent effort from Wehrlein sees the German go ninth with a 7.565.

A big crash for Kvyat in the final corner after the Russian ran wide. "I'm sorry guys," he sighs. "I crashed".

Replay suggests it was not driver error but yet another suspension failure, the right-rear. The Russian did run wide, hitting the notorious kerbs with his left-rear, but was that due to the problem on the other side of the car.

Of course, this means that for the first time a Manor looks to have made it through to Q2.

"Pit to Alonso: We're going to get ready to queue," warns McLaren. "There is time for a lap but we'd have to be ready." Indeed, when the session re-starts (there wil be just 1:44 remaining.

Hulkenberg heads the queue at the end of the pitlane, as the circuit has clouded over.

At which point Sainz stops on track shortly after leaving the pits... his engine having detonated.

Realising they are out of time, a couple drivers back off, among them the Haas duo.

Hulkenberg improves to seventh with a 7.385, he is the only driver to improve, Magnussen marginally missing the cut with his 7.941.