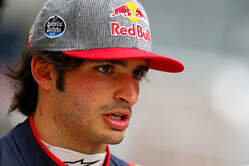 "Scuderia Toro Rosso confirms that Carlos Sainz will drive for our team next Formula 1 season, as Red Bull has taken up the option on the Spaniard's contract for next year," said the team in a brief statement.

"We are very happy that Carlos continues with us," added team boss Franz Tost, "because he has shown a very good performance since he is with Scuderia Toro Rosso and I am convinced that he will be very competitive and strong in 2017 as well.

"I am very much looking forward to next season as I am sure that Carlos will bring home very good results."

"Very happy to be signed by Toro Rosso for next year," tweeted the Spaniard, "but is time to focus on 2016 season as there is still a lot of unfinished business."

Although there is no official word on who his teammate will be, Horner had suggested Daniil Kvyat will remain alongside Sainz at the Faenza outfit.

"Dany is continuing his development," said the Briton, "you can see he is finding his feet now, and there is not an obvious candidate knocking on the door at the moment that would warrant that seat.

"It's great for us to have a driver development programme that is producing talent like Ricciardo, like Verstappen, Carlos as well, and of course Dany Kvyat. We are not short of talent in our stable."