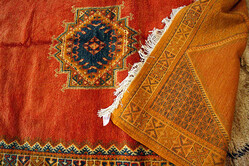 Hot on the heels of the European Grand Prix, the Pitpass team head to the studio for the latest podcast in which they discuss carpets, SLR cameras, cats and toe-tapping national anthems.

It was the carpets, flying and otherwise, that got editor Chris Balfe's mind racing ahead of the start of the race around the streets of Baku, dredging up bad memories of Morocco.

Max Noble meanwhile, was salivating at the thought of telling his cat all about the track as he commentates his way around the circuit on the latest Formula 1 video game.

Yes, carpets and cats, all the ingredients are there for a hugely entertaining podcast, or at very least a couple of poor choices in floor coverings.

Still, when they got serious the team lamented the new circuit, which they agree lacked soul, atmosphere and, as Balfe pointed out, spectators.

It also lacked any sort of reference to show the speed of the cars down the long front straight, meaning the bragging rights of it being the fastest street circuit in motor sport were more or less meaningless. Additionally, the team agrees it ruins the rest of the lap since any gains on the fiddly bits are lost in the slipstream down towards turn one.

Those fiddly bits caught out almost everyone, and Lewis Hamilton's qualifying misdemeanour didn't go without mention. It was an off weekend for the world champion, with Mat Coch suggesting he should spend a little more time reading the instruction manuals.

But if Hamilton's performance was a surprise Red Bull's wasn't as the Renault, or is that TAG Heuer, engine puffed and wheezed its way down the straight. The team might blame the Pirelli tyres but nothing beats horsepower down a drag strip reckons Noble.

There's discussion about radio rules, compliments for Sergio Perez and eyebrows raised over Williams' performance - not to mention that of Toro Rosso.

Whichever Nico it was in the Mercedes in Canada and Monaco looks to have jumped into the Force India, since Hulkenberg had a dismal weekend while Rosberg showed the kind of form with which he started the season. It raises questions on both fronts, with no easy answers to either.

There's a host of other topics covered, such as Noble being accused of animal cruelty, Sergio Marchionne's emergency sweater surgery and Balfe's displeasure at having the end of Le Mans ruined by some overzealous television commentator.

Finally, as Britain heads to the polls for its referendum on Europe, Balfe ponders whether subliminal messaging can be done aurally.

And on that cheery note we will LEAVE you.