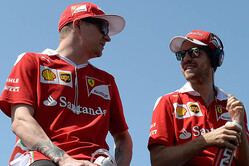 Ferrari president Sergio Marchionne has reiterated his call for Kimi Raikkonen to prove he deserves 2017 contract.

Following a disappointing season in 2015, Kimi Raikkonen has raised his game again this year, though there have been moments of frustration.

The Finn wants to remain in F1 and Sebastian Vettel wants to keep him as teammate, no doubt aware of the number of younger, hungrier drivers out there eyeing the Maranello seat, but once again Sergio Marchionne has called on the 2007 world champion to prove himself.

"It is up to him," he told Gazzetta dello Sport. Kimi's time with Ferrari will depend on his performance.

"He has to show he deserves to stay here," he continued, "otherwise I think he won't want to continue here as well.

"There will come a day when I will leave as well," he added.

Of course, things haven't been made easy for the Finn, or his illustrious teammate, by the shortcomings of the SF16-H, especially compared to the Mercedes.

"Their secret is the stability of the car," he admitted. "The SF16-H is new compared to the 2015 edition. Although the design looked great, once it took to the track there were some results that didn't match up to our expectations. We are trying to move past that in order to understand what is needed in order to improve our performance. It's a difficult car."

Although since his restructuring of the team there have been improvements, it is felt that in some areas the team is lacking.

"A big problem is giving an opportunity to those people who aren't on the frontline to grow," said Marchionne. "We aren't lacking people and there is talent there.

"One thing that I did, along with Maurizio Arrivabene, is that we met all the people we have within the company, even those that maybe don't get the attention they deserve. We want to give them opportunities to show they are capable. We need time, as changes are ongoing."

Asked if the team needs to recruit 'fresh blood', he replied: "We signed Jock Clear. There are people that are helping out those areas that are struggling.

"We want to round out the team," he added. "Results don't happen overnight, and we need time to bring about tangible results that will likely come in 2017."

Advised that this is 2016, he said: "That's true. All this is about the future, but results are needed now.

"I still believe we can win the title," he concluded, reiterating the claim he made in Baku. "There are still several races remaining and anything can happen."