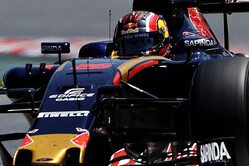 Carlos Sainz: "A really good race for me today here in Montreal! If you had told me before the race that I would have finished in P9 after starting P20, I would've probably signed immediately! I'm really happy to have made it back into the points, I enjoyed it a lot out there. We chose the right moment for our first pit-stop, going for the undercut, and I then did five or six qualifying laps on the Soft tyre, which allowed me to overtake five or six cars and keep up with the Force India. Even if I hadn't made yesterday's mistake in qualifying, more than a P8 this weekend was impossible, so we can be happy and satisfied with our weekend. A result like today's shows that we are strong and that we are constantly improving. Today we did the right strategy and good pit-stops, so I'd like to congratulate the whole team for this weekend, it's been great!"

Daniil Kvyat: "If I say the truth, it was quite a boring race today. We were trying to fight for that last point with Perez, but they were just that bit faster and we didn't manage to get in front of him. We then switched to the Ultrasoft tyres for the last stint, but the set didn't quite give us what we expected and they got destroyed while battling with the other cars around us. Unfortunately, I spent most of my race stuck behind a car and in traffic... Luckily the next race is just around the corner, so we can start thinking of that straight away and forget about today. But looking at the positives, it was a clean weekend for me, something which I needed. We were able to finish the race, as well as get important data for myself and the team, to learn as much as we can. We now need to start showing some performance and I hope we do this starting from Baku next week."

Franz Tost (Team Principal): "If we take into consideration where we started, to finish today's race within the points is a great result. The team and the drivers did a really good job. Carlos drove a fantastic race. He overtook a few of his rivals during the first lap and thanks to a very good strategy and fast pit-stops, he was able to gain a total of 11 positions, scoring two valuable points for the team. On the other hand, Daniil suffered a little bit on the Ultrasoft in the last stint, but taking into account that this is a fast circuit that doesn't suit our car that well, we showed quite a good performance in general. The car was fast, the tyres worked well and we are now looking forward to the new track in Azerbaijan."