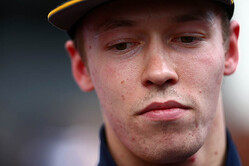 Stewards in Monaco have opted to take no further action after a post-qualifying examination of Daniil Kvyat's Toro Rosso revealed an infringement of the rules.

Shortly after the session, in which the Russian finished ninth, the stewards revealed that the vertical deflection on the STR11, under a vertical load of 4000 Newton, exceeded 5mm, a breach of Article 3.17.5 of the technical regulations.

However, after conferring with representatives of the Faenza team the stewards were satisfied that the failure was due to an impact suffered by Kvyat's car whilst on track.

"The team produced evidence that the car suffered an impact which reduced the downforce and resulted with a slower lap time than in Q2," said the stewards in a subsequent statement.

"Therefore whilst technically the car failed to pass the deflection test, the stewards have decided not to impose any penalty. However the team is reminded that further tests will be conducted and that future failure of the test may not result in the same decision."