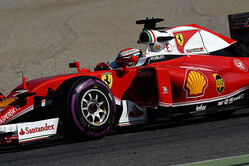 We've seen them in testing, but this weekend Pirelli's new ultrasoft compound makes its race debut.

The purple-banded super-sticky compound is intended to maximise mechanical grip, thereby making it the ultimate choice for slow circuits with tight corners, where low downforce means that the tyres have to do all the work of steering, turn-in and traction.

Though they've been seen in testing, this was at Barcelona, a circuit that has little in common with the tight, twisty streets of the Principality.

The Mercedes and Red Bull duos have both opted for the maximum ten sets of ultrasofts this weekend, as has Kevin Magnussen, whilst the Ferrari and Haas duos, along with Jolyon Palmer, have gone for nine sets.

Williams, Force India, Toro Rosso and McLaren, on the other hand have opted for just seven sets, the Woking team, along with Manor, opting for five sets of supersofts.

The ultras, which were debuted in pre-season testing, were in use again at Barcelona last week, with Romain Grosjean posting his best time of the first day - the fourth overall - on the purple banded tyres.

"This weekend sees the first appearance of the ultrasoft, which will be particularly interesting given that even the supersoft has arguably been too hard for this circuit in recent years," he said.

"We're looking forward to seeing what kind of lap time improvement that might bring - and perhaps even a new lap record."

In fact, new lap records are few and far between these days. While most lap records still stand from around 2004, the time of the 605kg, 3-litre V10, any new lap records in recent years have been the result of changes to the circuit or new additions to the calendar.

The fastest lap in Melbourne was 4.872s off the lap record established by Michael Schumacher in 2004, whilst Bahrain's best was 3.035s off the record held by Pedro de la Rosa since 2005.