Renault aiming to use upgraded engine in Monaco 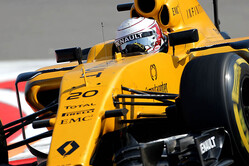 Following a successful test at Barcelona, Renault has confirmed that it is aiming to introduce its much anticipated upgraded engine in Monaco next weekend.

The unit was run during the two-day post-Spanish GP test, Kevin Magnussen and Esteban Ocon completing 227 laps without any issues. Now, rather than wait to introduce it in Canada, the French manufacturer is hoping to run the engine in Monaco.

"The power unit we have used since the first race in Australia was really a continuation of the work started in the 'Spec D' power unit we introduced at the tail end of 2015," said Engine Technical Director, Remi Taffin. "We explored some concepts in that earlier iteration and the 2016 unit took them further, for example in the turbo.

"This new spec goes even further down the line and also includes significant modifications to the combustion system," he revealed. "It will make the ICE more powerful but also efficient, leading to a gain of around half a second per lap. We've used a small proportion of our token allocation for this upgrade.

"The unit used since Australia has had several smaller upgrades and all the drivers were very happy with the standard in Spain," he continued. "In parallel, we've been working on the new spec since the start of the season but needed to sign off all the parts for reliability and mileage before using on track. The tests were very positive and showed it to be more powerful and driveable.

"We had originally planned to use the new version in Canada when the current units are scheduled to be removed from the cycle, but if we can get the units together and completely validated by Monaco we will use the ones available at this race."

If it is used it will be available to Red Bull as well as the Renault works team however, it is understood there will only be one unit available for each team.