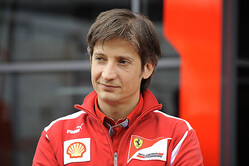 Faenza-born Rivola, who joined Ferrari from Minardi in 2006 as Team Manager, was promoted to the role of Sporting Director in 2009.

Clearly feeling the FDA will suffer following Baldisserri's departure, on his personal blog, Colajanni wrote: "I will not go into the details of what does this thing mean to the Ferrari Driver Academy, the project that Luca has created, along with Stefano Domenicali, and followed from the very beginning.

"Massimo Rivola will take responsibility, and this choice is already an indication of what will become the FDA, since it will not necessarily be the same thing: a proper training school, not only of young drivers but also of young men.

"The great objective of the FDA was to bring one of his youngsters driving a Scuderia Ferrari official car: that goal would have been achieved if we had not been taken away from our hearts a young talent and a great man as Jules Bianchi."

While there has been no official confirmation of Rivola's appointment - or Baldisserri's departure - from Ferrari, the Sporting Director's decision to step down came via (where else) social media.