Raikkonen no fan of new tracks 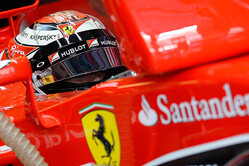 Purist Kimi Raikkonen admits that he is no fan of some of the new additions to the F1 calendar.

Be it his James Hunt alias or his attitude to the commercial demands of contemporary Formula One, it is clear that Kimi Raikkonen belongs in a bygone era of the sport.

Looking ahead to the new season, a season which sees Azerbaijan join the calendar in the form of the Baku European Grand Prix, the Finn has admitted his dismay at some of the other new tracks, revealing that, to him, they "all look the same".

"When we go to a new track, we know what to expect," he told Turun Sanomat. "They all look the same.

Confessing that he regards Korea's Yeongam circuit as "the worst", and that Abu Dhabi is merely a race "in the desert", he admits that there is one new addition to the calendar he really enjoys.

Sadly, it is the Istanbul Park circuit, which, though popular with other drivers and fans, was dropped from the calendar in 2011 after just seven years.

"Turkey was a nice track," he said. "I also liked Magny-Cours, the track was so different, and nearby wasn't much hassle.

"Imola was one of the best," he adds, "there was always a great atmosphere and it was a great challenge.

"Also the Nurburgring," he concludes, one hoping that he is in fact referring to the Nordschleife... can't you just see him in an open face helmet, grinning ear to ear as he leaps the numrous yumps.

Leave him alone... he knows what he's talking about.